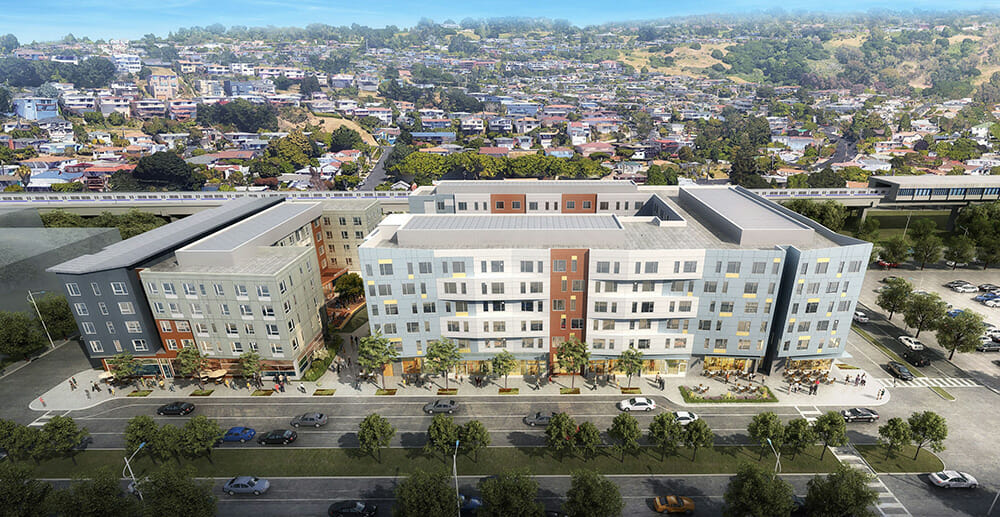 The affordable and market-rate units will be in their own U-shaped buildings that surround a pair of open courtyards. The central open space between buildings will be open to the public during daylight hours to encourage activity in the transit-oriented development. 67 of the units will be classified as affordable housing, ranging in affordability from 30% – 60% of area median income.

Named for the grocery chain that once occupied the block, The Mayfair project received its first stacked module unit October 2020 and reached its full building height of six stories after ten days of assembly.

The modules for the 156-market rate units of the project started production in June 2019. The modules were fabricated by Factory_OS, only 19 miles away from the site in Vallejo, Calif.

This project sits on a dynamic site in terms of passers-by. It is located on a major thoroughfare (San Pablo Ave.), next door to the El Cerrito del Norte BART stop and regional transit hub. The building façade was envisioned to push the boundaries of modular design while creating a dynamic expression that could hold up to the power of the site. Responding to the movement of the BART trains, the design has horizontal undulating angles that stagger between floors, not common in modular construction.

Normally, a site bounded by heavy traffic and a major public transit line would seek to turn itself inward to protect against these challenges to living; however, the design instead opens toward the BART parking lot with a two-story portal that offers glimpses into the inner courtyard and puts the building’s common space on display for the neighborhood to see.

The plan was arranged with building circulation in a single loaded corridor on the exterior, where the façade faces the BART track. This serves as a sound buffer to the interior units and creates a mostly solid area of the façade that will have a large-scale public artwork facing BART.

Rounding out the aesthetics, the design team is working with a local artist on an installation incorporating areas of mirrored building skin that will blur and change daily for commuters on BART. The idea is that as the time of day and colors of sky change, the rider approach and experience of passing by the building will be unique.

Initially, the Mayfair project was considered unbuildable as a modular project, given the complexity of exterior façade design. The architect and engineering team collaborated to figure out the best way to build the exterior envelope, which included the following challenges: