Modular construction attracted mainstream media attention during the pandemic — especially the modular hospital assembled in Wuhan, China in a matter of days. But it wasn’t just in China that modular companies were stepping up and responding to the urgent need for additional hospital space. For this article, we caught up with a couple of companies — one large, one small — whose work building mobile modular hospitals was covered in the July/August 2020 issue of Modular Advantage. They shared their experiences manufacturing mobile hospitals during the pandemic, and how those experiences have shaped their ability to respond to future emergencies.

One of several mobile hospitals designed and built for NATO by Italy's RI Group.

RI Group is a large Italian modular company, with factories and offices around the world, “from Kosovo to Lebanon, Djibouti to the UAE” as their website puts it. In 2019, the company responded to an international tender from NATO, for the supply of field hospitals. RI Group won the contract and developed a modular field hospital that consists of both soft, interconnected tent modules and rigid modules constructed from ISO 20 shipping containers. Delivery to NATO had been planned for early 2021, but when the pandemic hit Europe in the spring of 2020, manufacturing the field hospitals was expedited.

Since the summer of 2020, RI Group has delivered four fully-equipped mobile hospitals, mostly for NATO. The hospitals can be customized to include various specialized spaces — including triage, surgery, pharmacy, diagnostics, x-ray and ultrasound laboratories, hospitalization wards, recovery rooms, and so on. 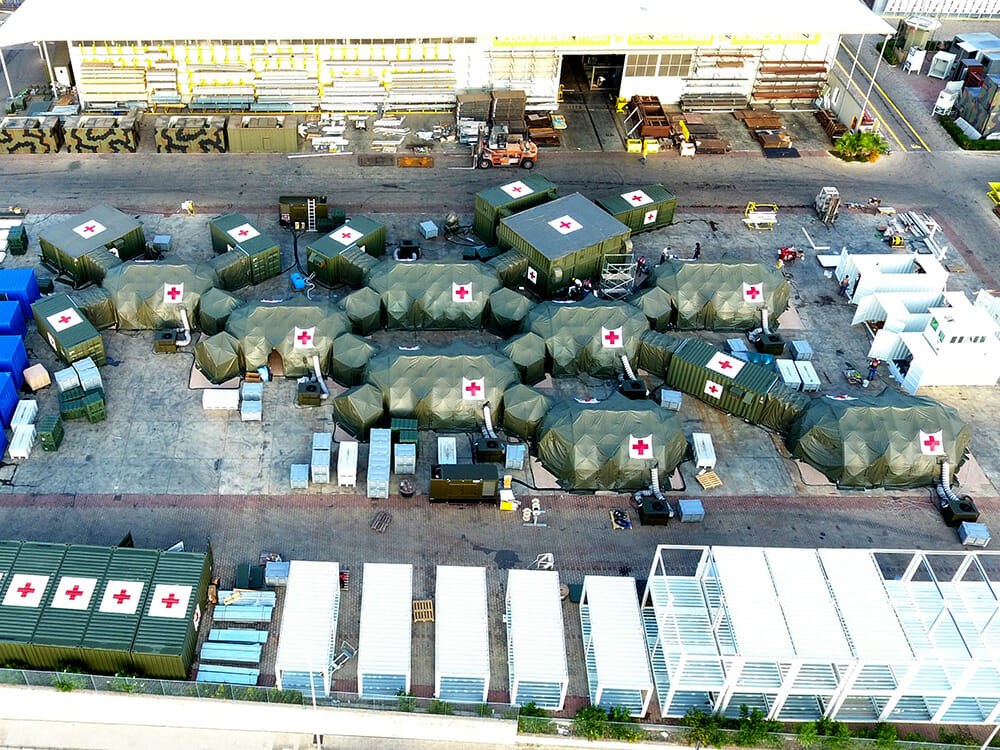 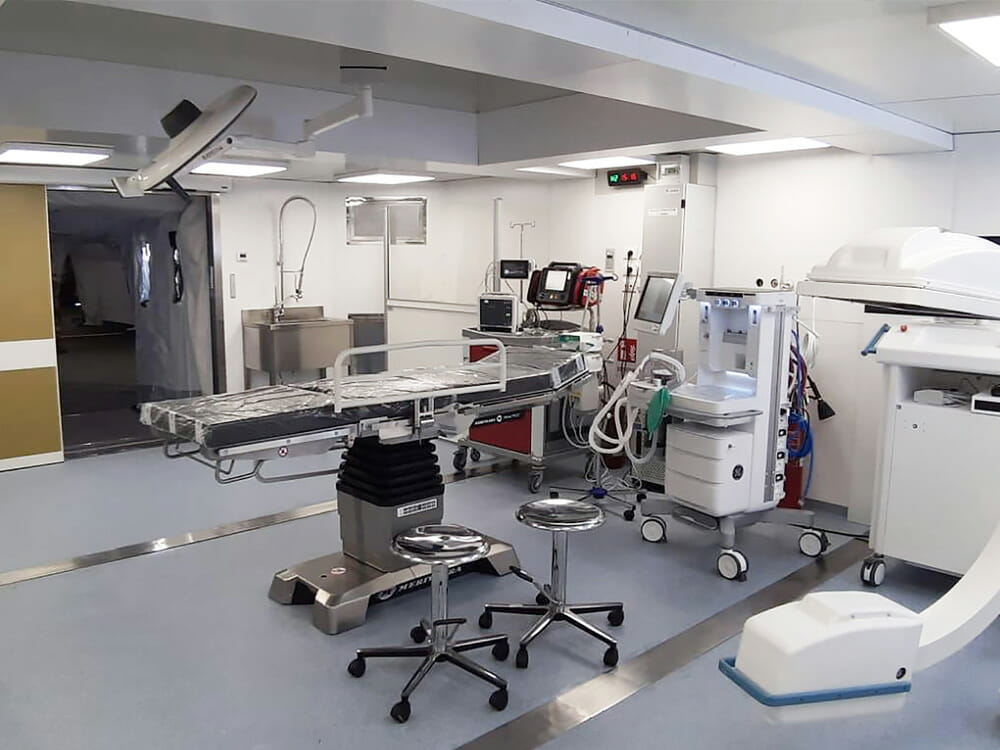 Inside one of the mobile hospital's operating rooms.

BMarko Structures is a modular company based in Dacula, Georgia and Greenville, South Carolina. In April 2020, for two hospitals, the small business built 48 patient rooms from 42 shipping containers in under four weeks, beginning to end. “The units were in production for 2.8 weeks, and then it took about a week to erect them and finish off the onsite work,” says Antony Kountouris, Chief Executive Officer.

The Need for Speed

In addition to the field hospitals, RI Group delivered other mobile medical facilities in Italy and elsewhere in Europe during the pandemic. “We still get daily requests for mobile medical facilities from both civilian and military organizations,” says Emanuele Tafuro, RI Group’s Head of Marketing. He says that prefabrication speeds up construction time because it greatly reduces onsite construction work. But they also use BIM [Building Information Modeling] to speed things up. “A digital representation of the product is shared with all the stakeholders on the project,” Tafuro explains. “This enhances information management and communication during project development — which also accelerates the timeline.”

Kountouris maintains that modular construction was the only way to build fast enough. In conventional construction, site preparation would have had to be completed before construction of the new hospital space could have begun. But by using modular construction, onsite and offsite work happened at the same time. “We could do the foundation work, let the concrete cure, lay the drains, and do all the other site work while we were building the hospital rooms in the factory. Having these processes overlap was necessary to accomplish the speed.”

BMarko Structures constructed this 48-room mobile hospital in under 4 weeks.

Over the course of the pandemic, RI Group has been able to “improve the medical specifications of our buildings and optimize the designs to make our products as durable and functional as possible,” Tafuro says. Because specialized medical buildings can be complicated structures, there were many opportunities to learn how to improve their processes and rapidly improve their products.

RI Group considers the prospects for modular medical buildings to be so promising, that they plan to open a research center in southern Italy, near to the company’s main production plant. The idea is for architects, engineers, doctors, and others (including researchers and students) to collaborate on designing and developing innovative modular buildings especially for healthcare and telemedicine.

At BMarko, the team “re-learned the lesson that it’s very hard to build a building without a finished design, and without complete shop drawings,” Kountouris says with a laugh. “Each day, we were trying to finish part of the design so we could get the shop drawings out to the team the next day, so they’d know what to do.”

In this episode of MBI's Inside Modular podcast, Cliff Hokanson, Executive VP of HHI Corporation, discusses HHI's Mobile Triage Units. Cliff walks listeners through the layout of the units, describes their functions, and talks about the requirements for building modular healthcare facilities.

Both companies found that their experiences during the pandemic strengthened their teams’ bonds. Kountouris says his team will be more comfortable responding quickly to a disaster in the future and that the experience increased the team’s confidence in their own abilities — and also in the capabilities of modular construction, especially with respect to speed.

About RI Group, Tafuro says, “From the designer to the welder, from the architect to the accountant, our experiences responding to the worldwide pandemic have created a sense of unity among our entire team.” It’s also been satisfying for the company to be part of the proof that manufacturing modular buildings can solve urgent problems, “not only for accommodation, but also for critical mobile medical infrastructure.” 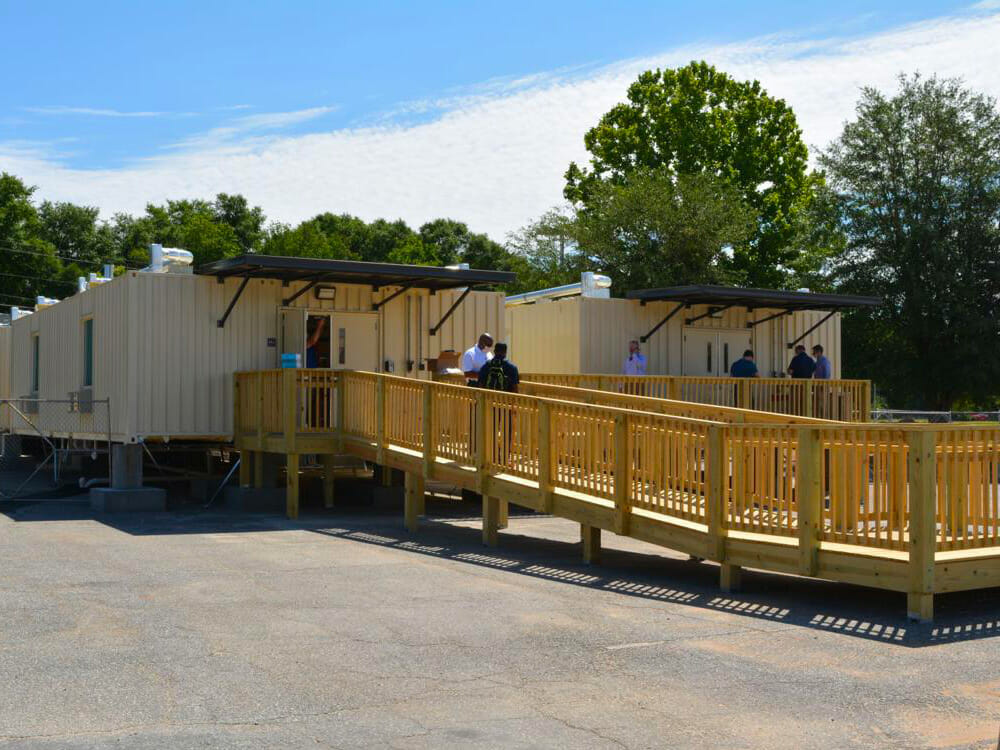 Outside one of BMarko's mobile hospitals. 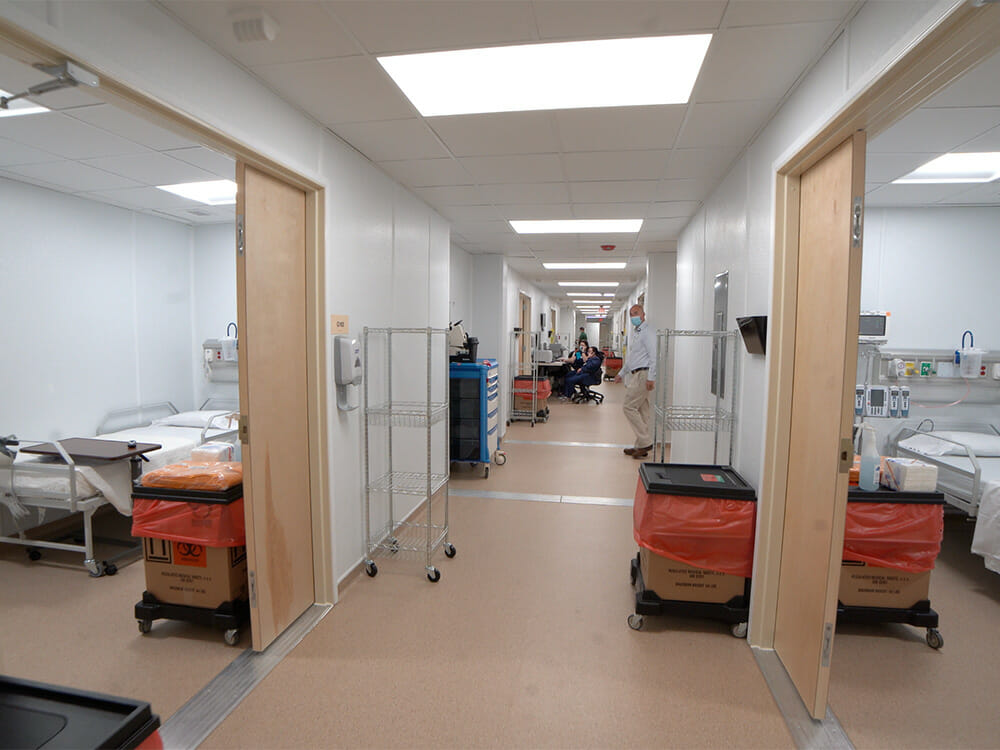 The whole experience was heartwarming for Kountouris. “I was amazed at the power of humans to pull together and do what needed to be done. Every vendor, every sub, gave it 100%. People really embraced the importance and the urgency, the necessity of not taking days off until we had patients going into those rooms. They trusted that we could get it done. We needed everybody to believe that. And it ended up being true.”

Kountouris points out that the patient rooms BMarko delivered have been used a lot and can be relocated if and when his clients decide to do so. They could be used for other temporary emergency responses or for a permanent application.

Similarly for other modular buildings used in a temporary emergency — they can be relocated and used again and again. Larger companies may be able to keep inventory in stock that can be transported where needed and deployed in emergencies. Another way to prepare for the tight timelines involved in an emergency is to manufacture units in advance, which is the route RI Group takes. Tafuro says, “Every month, we manufacture several units that can be used for numerous diverse purposes. Once we know a client’s requirements, we can quickly tailor the units for their specific needs.”

Kountouris makes the point that it’s hard for a small business to keep inventory in stock, available just in case disaster strikes. It would also be impossible for them to manufacture units in advance given that they don’t know if and when they’d be used. The solution? “I think it should involve government,” Kountouris says. “Organizations like FEMA [Federal Emergency Management Agency], and state level emergency management agencies, should place orders with modular factories now, so they can maintain an inventory of structures that can be deployed in an emergency.”

If the pandemic has shone a light on the capabilities of modular construction to rapidly construct mobile hospitals, that’s a good thing, so far as Kountouris is concerned. “I think some people at emergency management organizations still associate modular with trailers. But now they should know that modular is so much more than that.”

This article was first published in the Modular Advantage - January/February 2022 Edition.