For this article, Sunny Wang, general manager at BROAD USA, and his colleagues, Tony Sun (a structural engineer at BROAD) and Jeremy Zimman (BROAD USA’s Director of Communications), share some of the details about B-CORE.

BROAD Sustainable Buildings was founded in 2009, a wholly-owned subsidiary of the BROAD Group, which has been in operation since 1988. BROAD USA has operated in the US since 1997. One of BROAD’s innovations is B-CORE, a strong, lightweight stainless steel material it invested over a decade and $1.25 billion to develop.

“B-CORE is composed of two stainless steel plates with an array of stainless steel tubes fused between them,” says Sunny Wang, General Manager at BROAD USA. “Copper foil is fused to the stainless steel base material during brazing. Because the metals have different melting points, they can stick together very strongly. It looks very simple, but it’s super-light and super-strong.”

It’s a familiar story that the construction industry lags behind other industries in productivity and innovation. So it’s no surprise that the inspiration for B-CORE originated outside the industry. “B-CORE was inspired by airplane manufacturing, where stainless steel plates are brazed into honeycomb panels,” Wang says. “Those panels are light and strong but cost about $3,000 per square foot. We wanted to produce a similar strong and lightweight material at much lower cost.”

So BROAD set out to develop its own material. “We tested many techniques and types of ovens for the brazing, with many failures — but every failure was a chance to learn,” Wang explains. Ultimately, the company developed and patented equipment for hot-air copper brazing, in addition to its patented B-CORE material. 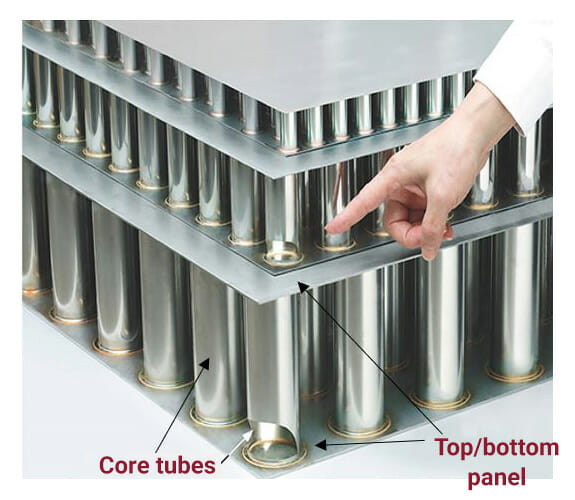 “B-CORE is composed of two stainless steel plates with an array of stainless steel tubes fused between them,” says Sunny Wang, General Manager at BROAD USA. "It looks very simple, but it’s super-light and super-strong.”

This combination of strength and lightness means the material can be used for almost any structural element of a building, including floor slabs, columns, beams, exterior and interior walls. “The sandwich structure stays the same, but the B-CORE slab can be adjusted in three ways to meet different strength and weight requirements,” Sun explains. “First, the diameter of the tubes. Second, the number of tubes in a given area. Third, the total thickness from top to bottom plate.”

For example, because “walls need to resist only lateral loads, they don’t need to be as strong as floor slabs. So the tubes in wall panels can have smaller diameters than in floor slabs,” Sun says.

BROAD’s production lines are set up to easily produce B-CORE in different sizes and configurations. Sun says, “We just send the data to the production line for the correct diameters for the tubes, and so on, and then we let the machines do the rest of the work.”

Learn More in this Podcast:
How to Create an 11-Story Building in Just 15 Days w/ BROAD USA

BROAD USA's general manager Sunny Wang and director of communications Jeremy Zimman join the podcast to describe BROAD's newest project: an 11-story modular multifamily "Living Building" that was built in just 15 days and then stacked in only 29 hours. What was behind this remarkably fast turnaround? BROAD's adaptable B-CORE stainless steel building slabs.

Learn more about B-CORE—and about BROAD's commitment to environmentally-conscious business practices—in this episode of Inside Modular! 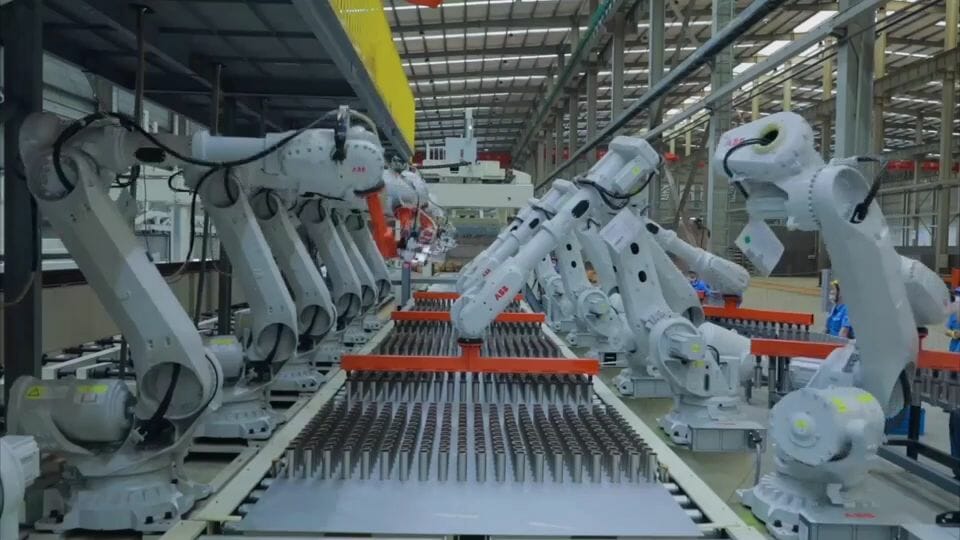 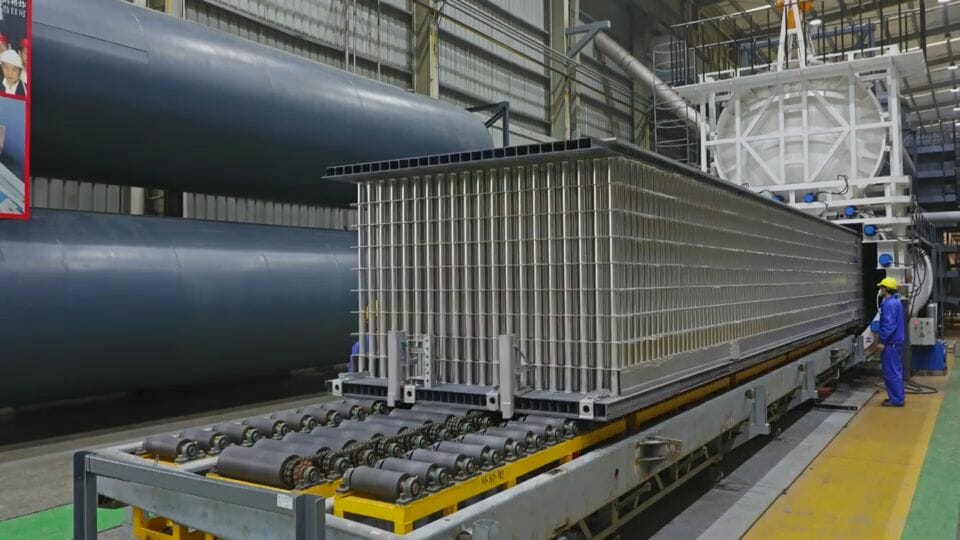 The BROAD team emphasizes that, in addition to its strength and lightness, B-CORE has environmental benefits. “Compared to traditional building materials, B-CORE results in lower carbon emissions during production and construction, and has zero construction waste. It’s fully recyclable too,” Sun says.

Zimman adds, “B-CORE’s low carbon footprint throughout its long life cycle can carry weight in the permitting processes in places like California and New York, which have policies in place to reduce the carbon footprint in the construction and operation of buildings.”

Zimman also notes that stainless steel generally has a very low rate of corrosion, “and the grade of stainless steel in B-CORE is over thirty times more resistant to corrosion than carbon steel. So it has a virtually unlimited service life and is practically maintenance free.”

Because of the material’s high ductility, Zimman explains that buildings constructed of B-CORE are also safer. “In an earthquake or hurricane, B-CORE might deform, but it’ll never collapse,” Zimman says. “In a hurricane or powerful storm, the storm surges can trigger or accelerate spalling in concrete buildings. The water will rust the rebar, which causes the concrete around it to crumble, weakening the entire building. That’ll never happen in a B-CORE building. As you build higher, safety in extreme weather becomes even more critical.”

Since B-CORE was invented in 2018, BROAD has constructed a number of buildings with the material, including apartment buildings in Shenzhen, China, and negative pressure isolation rooms for treating COVID patients in South Korea. BROAD’s F-Building in Changsha, China, is also built entirely with B-CORE. It’s an 81,000 sq. ft., 16-story office building that sits on four B-CORE pillars that are about three feet wide. “The lightness and strength of B-CORE enabled us to cantilever out to 55 feet. Our chairman and many of our executives have their offices on the top wing — they sit literally over the air,” Zimman says.

The company has also developed a turnkey building concept based on modules made of B-CORE — the Holon Building. The modules for these buildings are the same size as a shipping container (40 feet long, 8 feet wide, 10 feet high) when they’re transported, but on-site they unfold to 16 feet wide. “Holon buildings have a repeatable modular design, and all the mechanical, electrical, plumbing — including the HVAC systems and our own 100% fresh air ventilation system — are integrated into each module at the factory,” Zimman explains. The first Holon Building was built in Changsha in June. It’s an 11-story apartment building, comprised of 56 modules. It was built off-site in 15 days and stacked in under 29 hours.

Innovating in the modular industry

BROAD sees B-CORE as an innovation that will help the modular industry to build higher. Zimman notes that many modular manufacturers use wood, and very few work with steel —limiting them to four or five stories. “Although B-CORE slabs can be used for low-rise buildings, the economics improve and the benefits of the material increase as you build higher,” Zimman says. “We’ve modeled for up to 160 stories, and we’re targeting the sweet spot of 8-16 story buildings. There’s so much demand for housing that we think we’re hitting the market at just the right time with this new concept in modular construction.”

At the recent MBI-sponsored Offsite Construction Expo in Denver, Zimman says he felt inspired by how excited attendees were to see something new and innovative. “The pace of change in the construction industry as a whole has been much slower than in other industries. At the Expo, people who’ve been involved with the modular industry for a long time mentioned that even in the modular industry a lot of the technology is decades old, but we were showing something new,” Zimman says. “We’re the first to use stainless steel for all the building elements — the columns, beams, joists, floors, everything — and the first to create entire stainless steel turnkey modular buildings.”

The company is anticipating high demand as more people come to recognize the environmental and lifestyle benefits of reducing the distance between where they live and where they go to work or school. Wang says, “Demand is increasing for mixed-use buildings, incorporating both commercial and residential spaces. B-CORE is ideal for building these types of structures.” 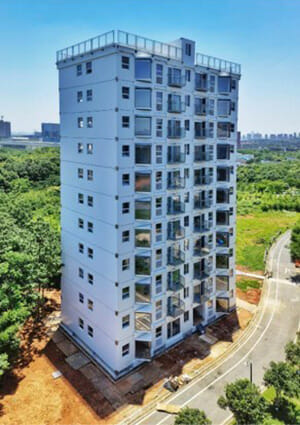 The company has also developed a turnkey building concept based on modules made of B-CORE — the Holon Building. The modules for these buildings are the same size as a shipping container (40 feet long, 8 feet wide, 10 feet high) when they’re transported, but on-site they unfold to 16 feet wide.