Relieving the Affordable Housing Crisis Across the Continent

Many cities and municipalities in North America are struggling with the challenges of a growing homeless population, a lack of affordable housing, and a shortage of local labor. Because the benefits of modular construction include shorter timelines, repeatable designs, and off-site construction, some jurisdictions are turning to modular to help solve their affordable housing problems.

Starting or accelerating modular programs can take significant political will. In this article, we look at four North American cities that are taking the initiative, overcoming obstacles, and driving forward with modular so it can significantly relieve local housing crises.

Amanda Gattenby, the Vice President of Development at Crate Modular, says, “Homelessness has skyrocketed in the area and reached critical levels in the last five years. The last homelessness count had over 66,000 homeless individuals in LA County.”

Gattenby notes that research indicates that housing the homeless is the fiscally responsible thing to do, as well as being compassionate. “When you take into account the cost of crisis services frequently used by homeless people — such as emergency rooms, police services and jails, and social services — it actually costs more to leave a person on the street than to pay for subsidized housing.”

Referring to a project Crate recently worked on, Gattenby says, “The land was going to be used for a jail. But an LA County Board Supervisor decided to use the land for homelessness services instead. Her office deserves a lot of credit, which is why her name is on the project: The Hilda L. Solis Care First Village.”

Designed by NAC Architecture, the project has a total of 232 units, a mess hall, and an administrative building. Crate’s portion of the project involved 40-foot converted shipping containers that each contain two sleeping pods. “Each sleeping pod is a bedroom and a bathroom. Sixty-six containers were stacked into two three-story buildings, resulting in 132 sleeping pods,” Gattenby explains. “Behind the pods, between the two halves of each building, there’s a utility yard where all the plumbing runs. A cherry picker hooked everything up back there.” 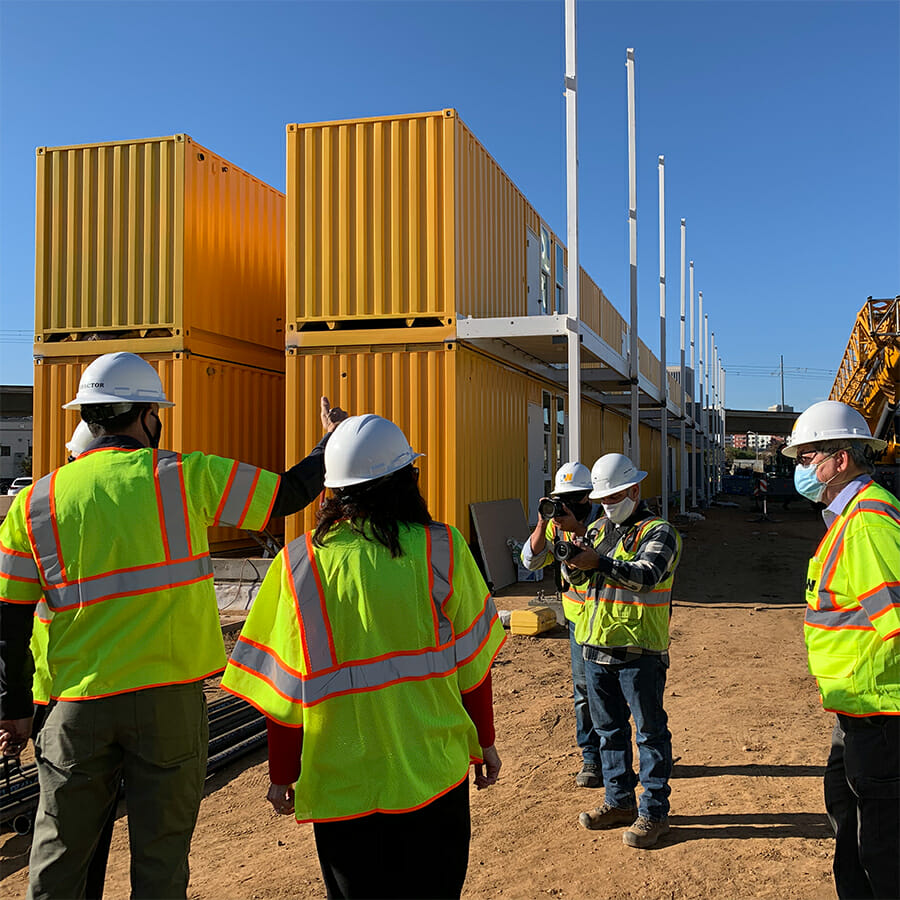 Coordinating the construction of the Care First Village. 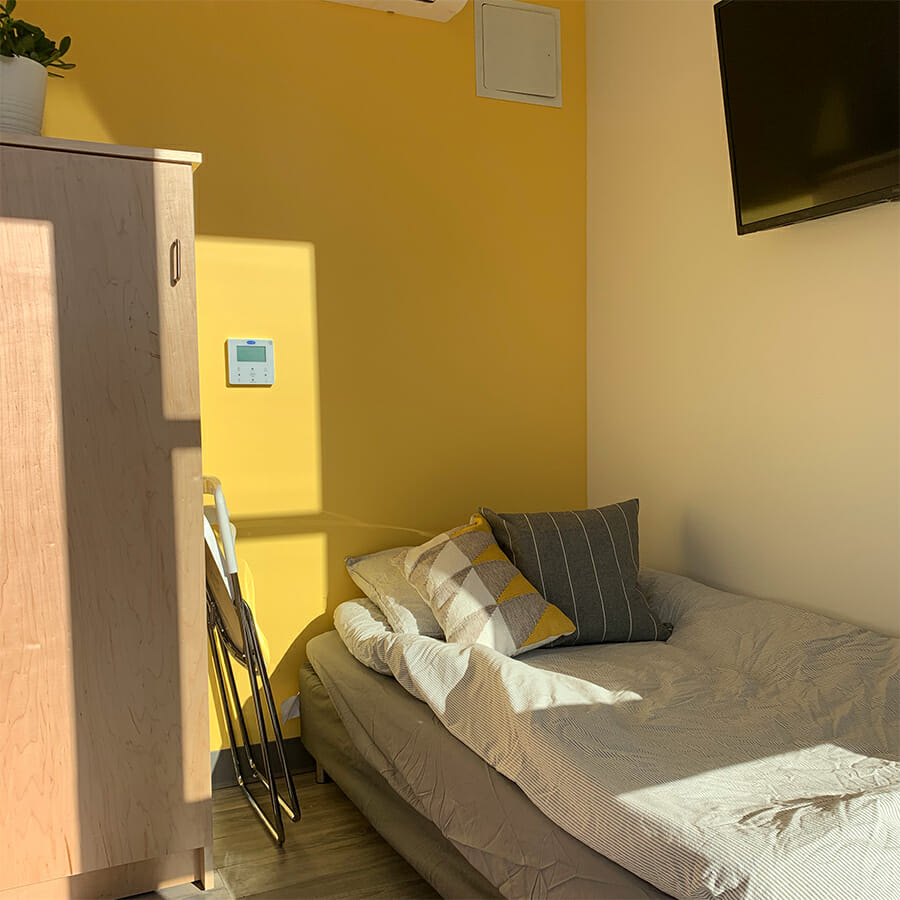 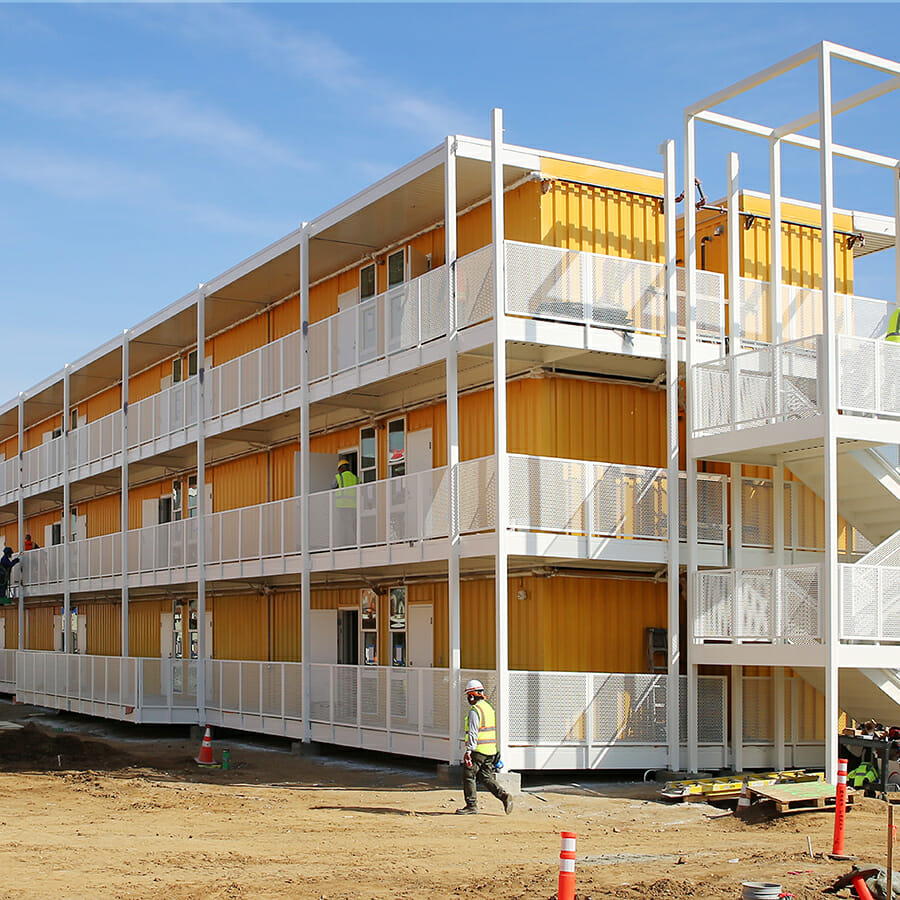 The project broke ground in October 2020 and the buildings were occupied in April. Gattenby says it took high-level political will to make the project come to fruition so quickly. “Emergency orders were passed at the county level and the state level because of COVID-19. And most of the money for the project was from the federal CARES Act Coronavirus Relief Fund.”

Gattenby believes that COVID has accelerated acceptance of modular technology “much like Zoom got moved forward by the pandemic.” She says, “More people now appreciate the speed of modular construction and the clean and efficient factory environment.”

In Salt Lake City, a bureaucratic obstacle has been preventing modular fulfilling its potential to help with the city’s affordable housing shortage. “Their city ordinance stated that building inspectors weren’t allowed to go outside city limits to do inspections,” says Jon Hannah-Spacagna, Government Affairs Director at MBI.

This has been a problem because modules that would eventually be installed in Salt Lake City would typically be manufactured in a facility outside the city (sometimes even outside the state of Utah).

To allow for inspections outside city limits, Salt Lake City needed to change their city ordinance to allow hiring third-party inspection agencies — but they also needed to be confident that the housing would meet their standards. With this goal in view, the city council recently voted unanimously to adopt a new ANSI Standard that MBI developed with the International Code Council.

“These new standards will help address the shortage of affordable housing units by making the installation of modules more streamlined,” says Orion Goff, Deputy Director of the city’s Department of Community and Neighborhoods. “Although the state of Utah has a state-wide building code, it hadn’t adopted any standards for modular construction. They’d left that up to each individual jurisdiction.”

The new ANSI Standard now adopted by Salt Lake City addresses local inspections and regulatory compliance, and sets out requirements for off-site and modular construction. Hannah-Spacagna says MBI hopes the state of Utah will adopt the standard too. MBI also plans to present the ANSI Standard to other states that currently lack a modular program, explaining how it can benefit them.

There’s a shortage of affordable housing across the United States. The National Low Income Housing Coalition reports that “Only 37 affordable and available rental homes exist for every 100 extremely low-income renter households” across the country. Furthermore, the organization found that no state or major metropolitan area has an adequate supply of rental housing for its lowest income renters.

There is good news, though. Two cities — Chicago and Salt Lake City — are removing obstacles so modular construction can do more to help address their housing shortages. 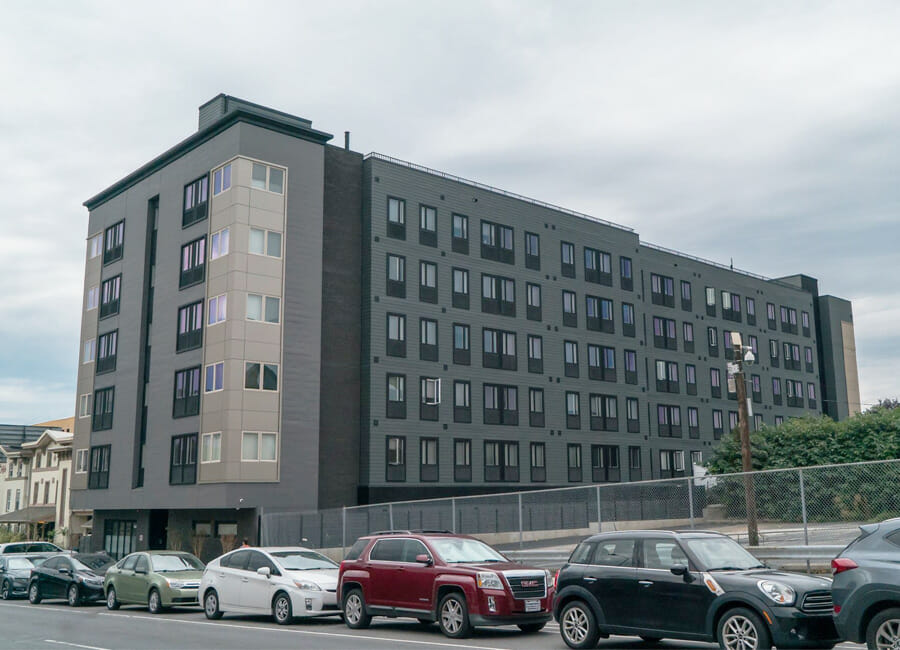 To address the shortage of affordable housing in Chicago, the city’s Department of Buildings and its Department of Housing initiated Bill SB 1839. Illinois State Senator, Mattie Hunter, sponsored the bill, and MBI issued a memorandum of support. It’s passed through the Senate, and is now being read in the House, where it’s sponsored by Representative Sonya M. Harper.

“The impetus for this bill is the City of Chicago wanting to promote innovative, safe solutions to our housing needs,” the Managing Deputy Commissioner of Chicago’s Department of Buildings, Grant Ullrich says. If it becomes law, it’ll mean that no jurisdiction in Illinois can adopt requirements for modular construction that are more demanding than the building codes for conventional, site-built structures.

Currently, an additional state-level standard that applies only to modular has been creating a barrier to larger scale modular buildings, such as multi-family apartment buildings.

“There were a number of developments of three-unit buildings in Chicago that ran into that state-level regulation,” Ullrich says. “The overly stringent regulation adds thousands of dollars of unnecessary cost per unit of modular housing.”

As the homeless population has grown and become more visible in Toronto, “Politicians have moved the issue up their agendas,” says Darren Richarz, Vice President for Sales at NRB Modular Solutions. 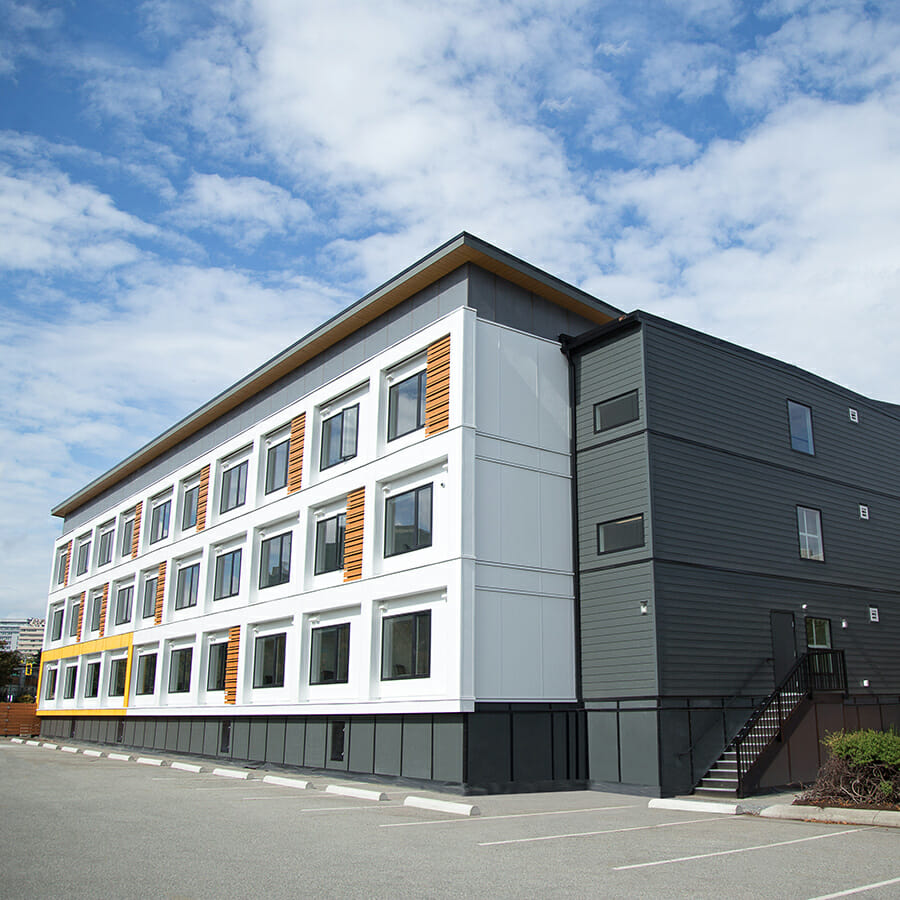 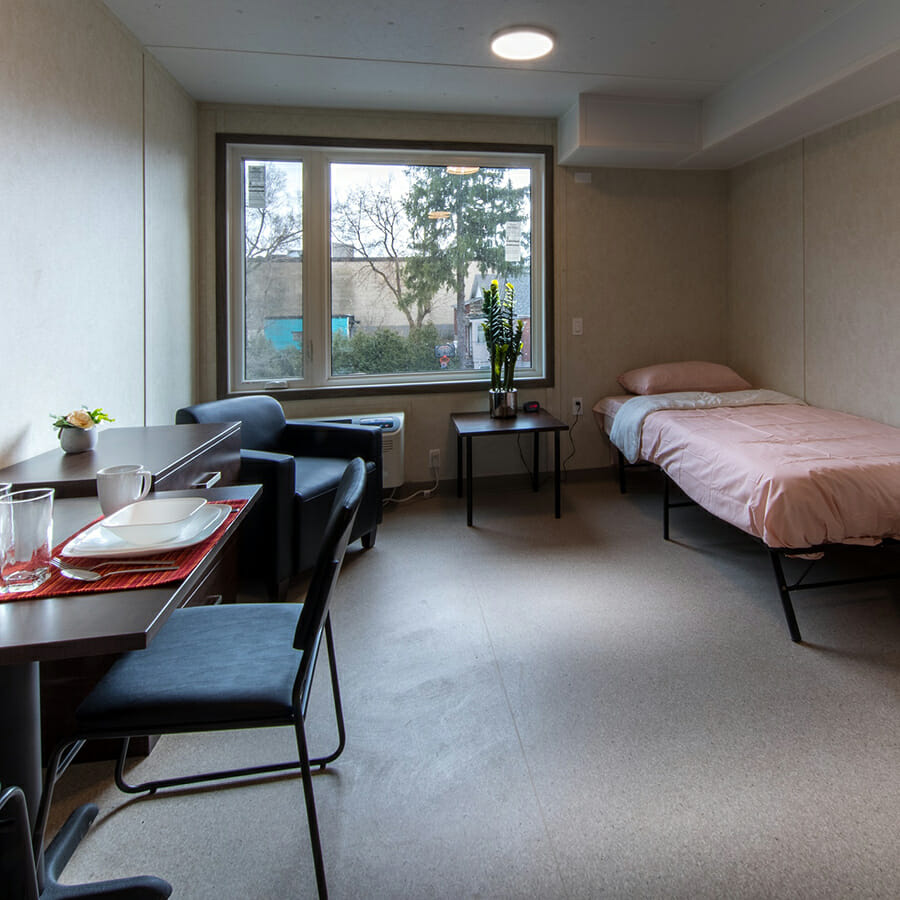 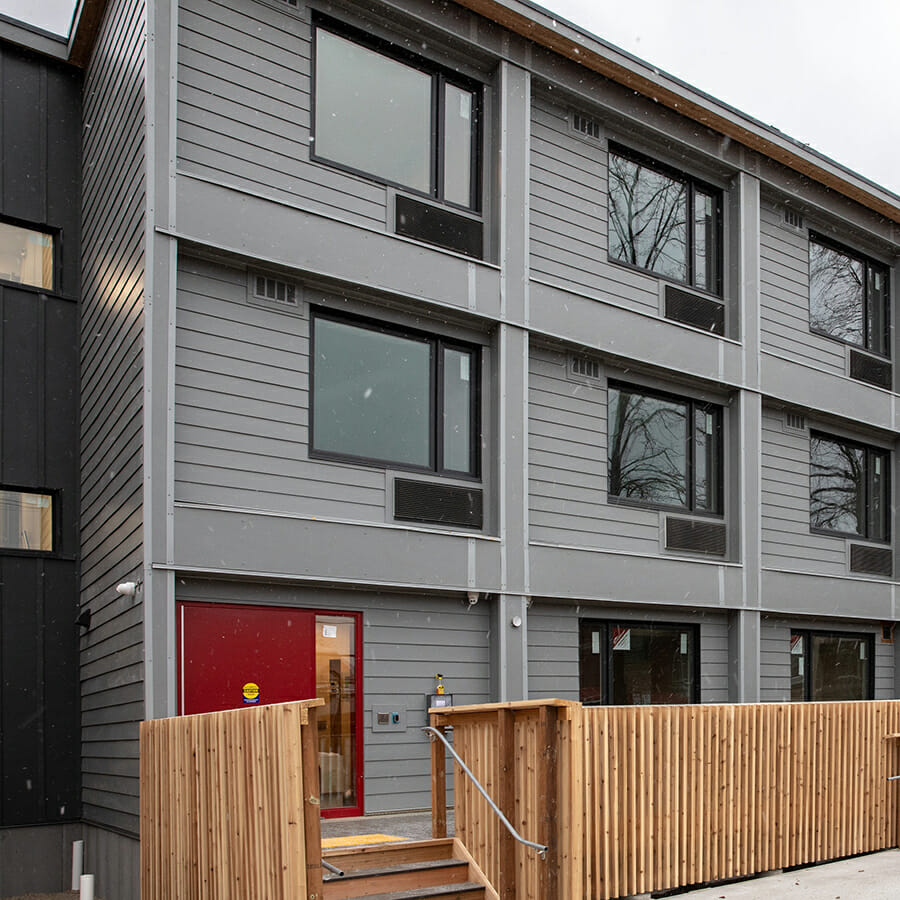 “The government received about $4.6 billion in qualified applications. In the April 2021 federal budget, another $1.5 billion was allotted to the RHI for the next year,” Richarz says. “The primary benefit of modular for affordable and supportive housing is speed. Faster construction gets that vulnerable population off the streets sooner.”

Richarz notes that a number of indigenous communities applied for funding under the first RHI. “The applications demonstrate the need within those communities,” Richarz says. “Many are in remote areas, where it can be challenging to build conventionally — because of the short construction season and limited access to labour — so modular is especially appropriate.”

Rhys Kane, Strategic Sales Director at NRB, notes that another benefit of modular for affordable housing is repeatable, scalable designs. For example, in British Columbia, “BC Housing committed to 2000 units of supportive housing. Across BC, we’ve completed close to 1500 units, both permanent and relocatable, within that program (first as Horizon North, now as NRB).”

Toronto seems to be following BC’s example, awarding NRB multiple builds over the next ten months. “Although there are minor differences based on location — such as for seismic requirements or snow load — the projects are all very similar,” says Richarz. “A standardized product makes it easier for governmental bodies to create long-term programs with greater cost certainty.”

In fact, the first affordable housing NRB built for the City of Toronto was based on a design the company used for BC Housing. “That was the fastest path. Toronto’s program was conceptualized in May 2020 and the Macey building was ready for occupancy in December, the Harrison in January,” says Richarz.

“There’s high demand. And, right now, there’s political will,” says Kane. “In Canada, this is a big opportunity for the modular industry to step up.”