The Modular Solution to the Construction Labor Shortage

It is not too difficult to find articles citing the construction industry’s woes over the shortage of available skilled workers. All sorts of initiatives, efforts, and conferences have been held on the topic for the last decade or so in an effort to reach more young people and gain more entrants into the industry.

According to the Bureau of Labor Statistics (BLS) and National Association of Home Builders (NAHB) there are currently 143,000 vacant construction positions nationwide. And these job openings are not minimum wage positions either. BLS data shows that the mean wages for a person in the non-residential building industry is just over $25 per hour. Of course, this is a general average among all trades and regions, but certainly respectable pay

A recent survey by the NAHB revealed that 69% of its members were experiencing delays in completing projects on time due to a shortage of qualified workers, while other jobs were lost altogether. And the problem isn’t going away anytime soon. 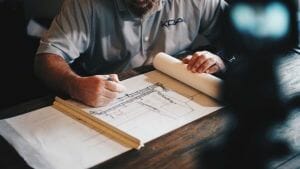 According to the 2015 Workforce Survey Results from Associated General Contractors (AGC) of America, over 60% believe it will continue to be hard to hire or become harder to hire construction professionals. In 2010, the average age of a construction worker was 40.2 years. By 2016, that number rose to 42.7 years, demonstrating that the workforce continues to age.

Just because there are 143,000 openings now, doesn’t mean there are 143,000 qualified people to do the work where it needs to be done. Over the past decade, U.S. educational policies and resources have shifted more towards college readiness, at the expense (we think) of vocational training programs. Local, state, and federal policy makers need to recognize and support the value and importance of community colleges, apprenticeship programs, and vocational training on our economy. (See sidebar story on TRACOM).

Many of these very small employers have little to no experience with the challenges of owning and operating a business. Specifically, smaller contractors struggle with recruiting, screening, and training new employees, navigating the human resource requirements, offering and managing fringe benefits, and regularly evaluating and promoting workers. “Training” consists almost exclusively of on-the-job experience.

So, it may not be a huge surprise to learn that safety has been, and continues to be, an issue in the construction industry. The BLS reports that there were 985 industry fatalities in 2015, up 5% from 2014. There was also a 15% increase in the number of reportable injuries and illnesses, according to that same 2015 AGC workforce survey.

These issues lead to higher costs, higher turnover, lower productivity, and lower employee morale. Within the private sector, workers in manufacturing had the highest tenure among major industries, at 5.3 years in January 2016, compared to 4.0 years for the construction industry (BLS).

The reality is actually the opposite of the old saying we’ve all heard 1,000 times. When it comes to construction, the answer always seems to be “we need more people.” The construction industry is one of the few remaining industries so heavily reliant on physical labor, embracing the “next man up” mentality. No time for training, gotta get the job done on time.

According to McKinsey Global Institute: “Consider that in the United States between 1947 and 2010, agriculture achieved cumulative real growth in its productivity of 1,510% and manufacturing 760%. Construction managed only 6%. U.S. construction-sector productivity is lower today than it was in 1968, and investment has fallen over the past decade. Over the past 20 years, productivity has grown at only 1% annually, only around one-third the rate of the world economy and only around one-quarter of the rate in manufacturing."

Is it any wonder that younger people are NOT entering the construction industry? Our policy makers place little to no value on vocational training. Small employers are more focused on selling the next job than training and retaining employees. Fringe benefits? Steady paycheck? Maybe, maybe not. Hard work, harsh outdoor environments, risky working conditions? Highly likely. Cool stuff like technology, automation, building information modeling? Not at most of the construction companies – no time, budget, or appetite for those things.

With the U.S. economy strong again and unemployment rates historically low, one might wonder why anyone would think a crisis is looming. The answer is simple: there are not enough skilled workers to build all the projects that need to be built in the same manner they have been built in the past. The demand (need) for construction in the U.S. is high while the supply of labor is flat and declining relative to demand. 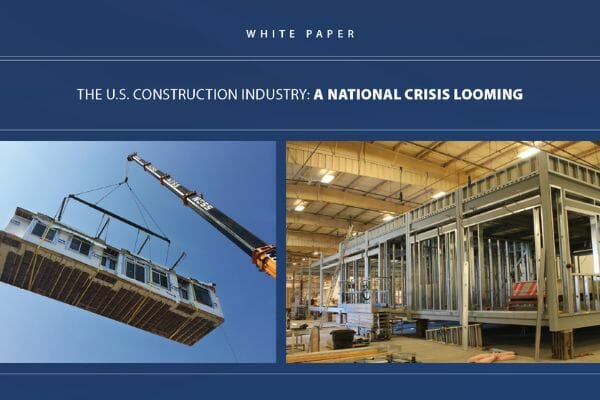 The Modular Solution to the Construction Labor Problem – Industrialization

Currently, the modular industry in the United States accounts for about 3% of all new building and home construction starts, a much lower adoption rate than in other developed nations. In Japan, for example, nearly 20% of all homes are constructed with an industrialized or prefabricated process. Sweden has the highest adoption rate with a whopping 84% of detached homes prefabricated.

There is a major difference between the US (and Canadian) industry compared to other European and Asian countries. In North America, we still CONSTRUCT buildings piece-by-piece, nail-by-nail, site-by-site, with all the variables, conditions, and challenges associated project-by-project. Other countries approach their construction industry with a manufacturing and assembly focus. They think in terms of processes instead of projects with a goal of minimizing waste and inefficienc

The Japanese are experts in lean manufacturing techniques. They used this expertise to “school” the U.S. auto industry in the 1970s-80s. They also transferred their knowledge and best practices from their auto industry to their construction industry. Today, about seven major modular home factories in Japan crank out over 100,000 homes annually. That’s more than the entire U.S. modular home industry. Ironically, the U.S. auto industry DID eventually learn this lesson and now assembles cars made up from components manufactured at other plants. It no longer takes a mechanic to build a car.

Another major difference in adoption rates is that other governments are banking on and supporting industrialization and manufacturing efforts. The U.K. government recently announced a deal with a Chinese company to open six manufacturing plants in the U.K., employing U.K. citizens and building 25,000 housing units for the people of the U.K.

Now, at this point you may be thinking that industrialization of the construction industry would mean FEWER workers needed. Possibly. More accurately it would mean workers with a slightly different skill set are needed.

Many countries are embracing industrialization in part due to difficulty in finding labor, but also due to the high demand for more affordable housing inventory. In the U.S., we currently have:

1. A shortage of skilled construction labor.
2. A shortage of decent, affordable housing inventory.
3. A vastly under-utilized manufacturing base/ infrastructure.
4. A need for more stable, predictable jobs.

The modular industry can offer more predictable work locations and hours, less labor-intensive work, a higher degree of technology integration in the work place, and much safer working conditions.

We can serve as a catalyst for the major rebirth of the US manufacturing base, creating thousands of new jobs while addressing our own massive infrastructure needs. It just makes sense, doesn’t it?

The program combines curriculum developed by the University of Florida, National Center for Construction Education and Research (NCCER), and the Manufacturing Skill Standards Council (MSSC) to create a standardized model for manufactured construction. TRAMCON is designed for participants to gain stackable qualifications which consist of up to seven credentials and certifications (OSHA, MSSC, 3 NCCER Credentials, Fork Lift, and Aerial Platform certifications).

The purpose for the development of the TRAMCON program is to provide training for the manufactured construction industry in order to increase productivity and reduce turnover of employees through training and education. To date, the consortium has 1,744 participants, 1,356 completers, and 1,687 certificates earned.

Santa Fe College has had amazing success stories with these participants. One participant who had been unemployed for quite some time completed the foundation level of training and was placed in a job in a local woodworking shop. He continued the TRAMCON program and completed Basic and Advanced Levels while working fulltime. Another participant came in as an unemployed veteran. He had previous construction experience, but had no credentials or certification to show for it. He completed the foundation level of training and gained employment with a local company that manufactures and builds theme park attractions and decorations. He has since been promoted from his original position and loves his job!

The program is currently in the wind-down stages of training and will end on March 31, 2018. The participating schools are now looking for ways to assist employers and industry leaders in educating and training employees in manufactured construction. Over the past two and half years using the TRAMCON model, the program administrators have a good idea of best practices, what works, and how to best deliver manufactured construction training. The goal is to see TRAMCON continue as either a short training program, a pre-apprenticeship model, or a full apprenticeship model.

Laying the Foundation of the Modular Building Institute

Modular vs. Stick Built and A Case for the Future of Construction

Modular Building is (Almost) as Old as the Hills