Mike Wilmot is the co-founder, co-owner, and president of Maryland-based Wilmot Modular. For over 30 years, Wilmot Modular has been building rapid and innovative modular building space solutions. In this article, Mike describes his company's experience responding to natural disasters and offers advice to other companies looking to help during the next disaster.

Based in Maryland, Wilmot Modular has been in business for over three decades and the company has responded to a number of disasters and emergencies over the years. Mike Wilmot is the Co-Founder, Co-Owner, and President of Wilmot Modular. 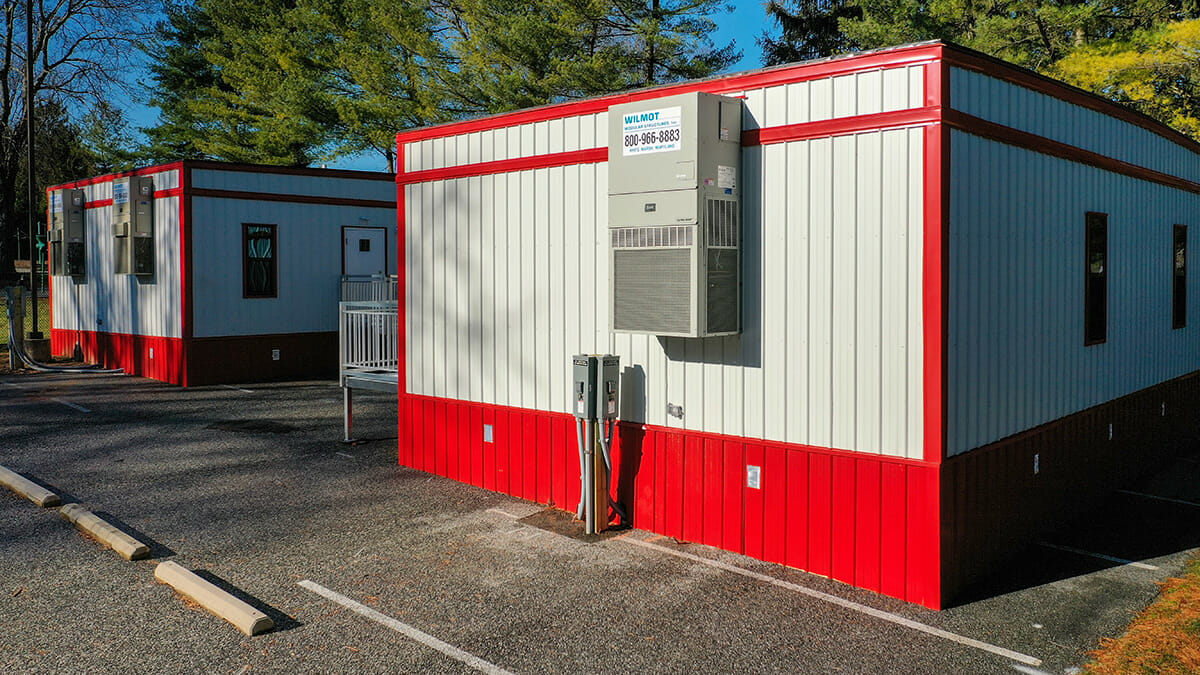 Following the outbreak of COVID-19, the Boys’ Latin School of Maryland wanted a separate space where students could wait until their parents picked them up. Wilmot Modular delivered these spaces in addition to an extra classroom.

In April 2020, a makeshift hospital was being set up in a Washington, D.C. convention center. Before the building could begin treating COVID patients, the medical staff needed access to showers so they could properly decontaminate after their shifts.

“The convention center contacted us to see if we’d be able to help them out,” Wilmot says. “By hiring extra people and working around the clock, we retrofitted six buildings in about three weeks and delivered them to the temporary hospital. It allowed them to get up and running to take care of COVID patients.”

Hiring can be a challenge in the best of times but Wilmot says, “it was especially difficult at short notice and during COVID. But we tapped into our network of contacts and got it done.”

They’ve completed many other facilities related to the COVID-19 pandemic, including health suites and check-in stations for screening and testing students, employees, or visitors for COVID at various schools and businesses.

For example, for students who showed COVID symptoms or tested positive from a rapid test, the Boys’ Latin School of Maryland wanted a separate space where students could wait until their parents picked them up. They also installed an additional classroom, which allowed them greater flexibility to physically distance students. “By taking those steps, the school was able to re-open earlier than most other schools in the area. Many private schools, like Boys’ Latin, experienced an increase in attendance this past year because they found ways to provide in-person teaching,” Wilmot says. 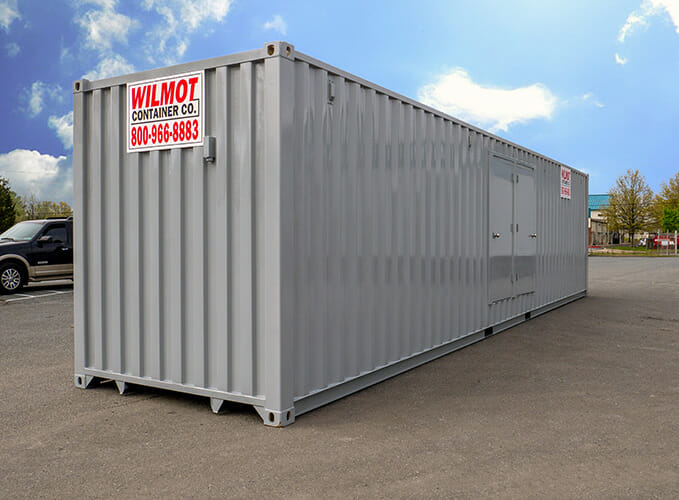 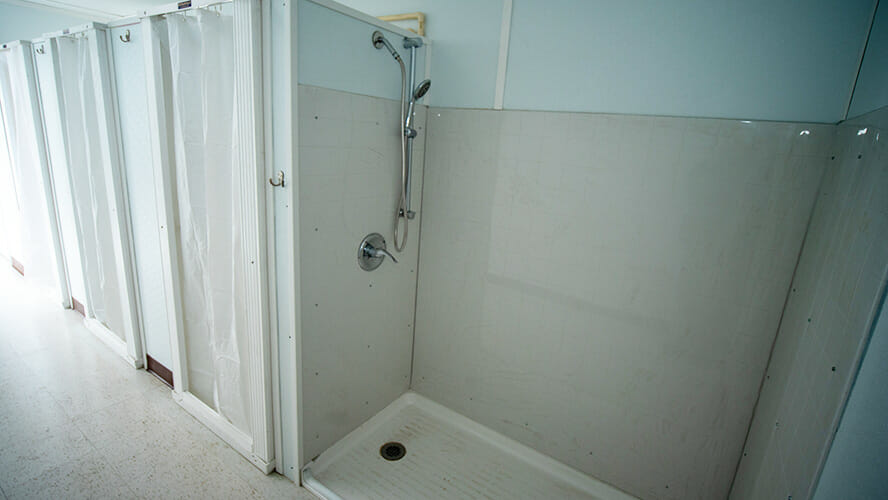 Before a Washington, DC-area temporary hospital could begin treating COVID patients in 2020, the medical staff needed access to showers so they could properly decontaminate after their shifts. Wilmot Modular delivered these retrofitted container structures for hospital staff.

Tessco is a distributor of wireless communications products based in Hunt Valley, Maryland. A broken water main caused a fire hydrant to shoot water through the side of their building in 2002. Suddenly, 145 employees had no place to go to work. “So we worked day and night, mobilized our existing fleet, and deployed 13 buildings within a week to get 145 people back to work,” Wilmot says.

A New Orleans medical facility was destroyed by Hurricane Katrina in 2005. Wilmot Modular was able to retrofit a building at their Maryland location and ship it to New Orleans — filled with supplies donated by their employees and suppliers. It took only one week to retrofit and ship the building. “Medical staff used the building while a new permanent facility was built. Apparently, the building was moved after the disaster clean-up because it was spotted in a different Louisiana city a few years later.”

On President’s Day weekend in 2008, the Bennett Middle School in Wicomico County, Maryland lost several classrooms in a fire. They called Wilmot Modular’s Emergency Response line and reached one of the company’s sales representatives. She contacted the fleet manager, who arranged for a crew to retrofit one of Wilmot Modular’s buildings that could serve as classroom space. “It was a holiday weekend, but our dispatcher pulled in a favor from a friend in the Maryland Department of Transportation,” Wilmot recalls. “She got us permission to haul the modular units on the highway and to go over a toll bridge that’s usually closed to truck traffic on a holiday. The classrooms were delivered and installed by Tuesday morning when students returned
to school.”

Advice to other modular businesses looking to help out in disasters

Obviously, speed is critically important in an emergency situation, so Wilmot says it helps if modular business owners are “tuned into what’s going on the news.” If they know that a hurricane is on its way, they can respond more quickly in its aftermath if necessary. The same point applies even to relatively small, local disasters. A flood in one small area might not make the national news, but if it’s in a state you can service, it’s news you should be aware of.

Once someone has reached out for help, Wilmot advises rapid communication with decision-makers and getting details of what the client is looking for in writing as soon as possible. “Then you can get materials and labor more quickly.”

Furthermore, Wilmot says, it really helps to speed things up if you already have relationships with companies, organizations, and governmental agencies involved in disaster relief. It also speeds things up if modular businesses already have relevant information about their current clients. For example, knowing how many employees the client has and understanding their day-to-day business operations can help with a rapid response if disaster strikes.

If a company is looking to get involved and help out when there’s a disaster, they need to be realistic. Not every team has what it takes. “You have to have people on your team who are willing to go the extra mile, because disaster relief work tends to involve a lot of intense, hard work at very odd hours. At Wilmot, we’ve been able to do that.”

Finally, Wilmot advises modular businesses to simply talk with their customers: “Make sure you’re on their radar as a source for quick building space, if needed.”

“You have to have people on your team who are willing to go the extra mile, because disaster relief work tends to involve a lot of intense, hard work at very odd hours. At Wilmot, we’ve been able to do that.”

To help speed things up in an emergency, Wilmot Modular has instituted its own Rapid Response Program. Any organization, whether a current client or not, can sign up. Clients enter information about their location, all the necessary contact information, details about what the business does, square footage and other details regarding their current space, and so on. This means that the information is at the fingertips of Wilmot’s 24/7 on-call space planners.

When asked how the industry could better prepare to respond to future emergencies, Wilmot suggested, “It would be good to
create a centralized system that FEMA, or anybody else involved in an emergency, could use. Perhaps this could be created through MBI.” The idea is that if there was a disaster in North Carolina, say, it would be easy to look up the operators that serve North Carolina and see what inventory they have available for lease. “Then buildings could get shipped to where they’re needed more quickly.”