Repetitive production is more efficient than one-off production. A large-scale, repeatable process reduces waste because it’s honed to maximum efficiency. The controlled environment of a factory also means there less damage to materials due to moisture, and there’s a lower risk of theft and vandalism. It’s much easier to maintain security at a permanent location and with consistent staff, than it is at a temporary outdoor site with a constantly changing workforce.

There’s more opportunity for re-use and recycling in a factory environment. Scrap wood from one project can easily be used in the next, for example. Relocatable modules are designed to be re-used in a different location

Modular construction involves fewer transport activities. Workers travel to the factory and stay there for each workday. All the materials they need are already in the factory, so there’s no need for repeated trips to get supplies.

Imagine building a lakeside hotel. With conventional construction, an ecologically sensitive site like this could be disturbed every workday for two or three years. Modular construction causes much less site disturbance because most construction takes place in the factory. Setting the modules in place and joining them together at the site is a relatively brief task. During construction, there’s also less noise pollution from an enclosed factory than from an exposed construction site. 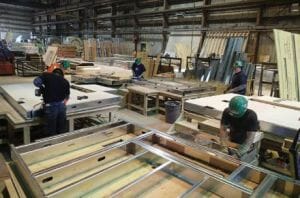 In the longer term, though, lower energy usage is also an effect of the higher quality construction that’s possible in a factory. Dr. Zhen Lei, Assistant Professor and OSCO Research Chair in Offsite Construction at the University of New Brunswick’s Off-Site Construction Research Centre says, “The sound building envelopes that the modular construction approach brings help reduce building energy consumption in the long run, especially in a cold climate such as Canada.”

There are three main reasons that modular construction is faster than conventional construction.

With modular construction, there’s no need to wait for a foundation to cure before starting to construct hotel rooms, for example. The hotel room modules can be manufactured at the factory at the same time as the site is prepared and the foundation is poured and cured.

According to an article in Cost Engineering, “Adverse weather has a significant impact on the productivity of many construction tasks, and accordingly is considered one of the main factors causing delays and cost overruns on construction projects”. A factory doesn’t have to stop manufacturing due to bad weather. In addition, because security is easier to maintain at a factory than at a temporary outdoor construction site, there will likely be fewer delays due to theft and vandalism.

Because modular construction is faster, buildings can be occupied sooner — which means a faster return on investment.

Zena Ryder is a Freelance Construction and Healthcare Writer. You can find her at Zena, Freelance Writer.