This year, MBI had to create a new category in its Awards of Distinction contest just to accommodate all the modular hotel projects submitted. The big winner in this new category was Stephen B. Jacobs Group, an architect firm based in New York City for their citizenM New York Bowery Hotel.

Fabricated by Polcom Modular, this 20-story, 100,000 sq. ft. hotel is the tallest modular hotel in the world. Located in New York’s Lower East Side, the hotel was originally designed as a conventional poured-in-place concrete building. But the client, citizenM, decided to have the firm redesign the hotel using modular construction.

The hotel consists of 300 guestrooms comprised of 210 modules, a majority being doubles (guestroom-corridor-guestroom). The closed and controlled environment of a factory allowed for an efficient build and a higher quality of finish in the construction of the hotel guestrooms. The guestrooms were completed within four months in the factory. Each guestroom was completely fitted out with plumbing fixtures, lighting, furniture, and finishes before delivery to the site. The only interior items of the guestrooms that needed to be installed on-site were the mattresses and television. The ability to construct 15 floors of guestroom modules in a factory simultaneously as the base building site work was being done led to a shortened construction schedule; therefore, cost savings. In addition, the hotel was designed with only two guestroom types: a typical room and an accessible room as required. A typical guestroom is only eight feet wide by 20 feet long. The efficient layout of compact repetitive modules maximizes the number of guestrooms the site can provide and so, a higher profitability for the hotel. 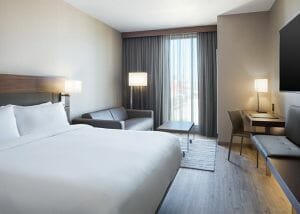 While citizenM may be the tallest modular hotel, it’s the Marriott Corporation who have really fueled this growth. In 2017, Marriott announced that it was expanding its modular construction initiative with a goal of 40% of future hotels built in this manner.

One such recently completed project was the Marriott AC Nulu in Louisville, Kentucky. Manufactured by Champion Commercial Structures, this 67,000 square foot hotel was completed in only 259 days! This project was built as a hybrid with both modular and conventional construction. The site built first-floor allowed the taller ceilings for the back of house and reception spaces, while still allowing the project to be built with a traditional slab on grade approach.

Time was the deciding factor for the developer and city of Louisville in choosing modular construction for this hotel. The hotel was able to open in the Spring of 2018, just in time for the Kentucky Derby.

“There’s a movement not just in the hotel industry but across other disciplines that we’re starting to see a trend … you can build your projects faster, produce higher-quality rooms and lower cost in a factory-style development,” Marriott International Chief Development Officer Eric Jacobs told Bisnow at the Americas Lodging Investment Summit at the JW Marriott in downtown Los Angeles.