While construction has appeared stuck in a time warp, other sectors have transformed themselves. Consider that in the United States between 1947 and 2010, agriculture achieved cumulative real growth in its productivity of 1,510% and manufacturing 760%. Construction managed only 6%. U.S. construction-sector productivity is lower today than it was in 1968, and investment has fallen over the past decade. 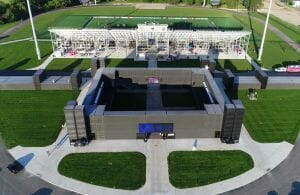 Research from the McKinsey Global Institute finds that U.S. construction accounts for one-third of a $1.6-trilliona-year global opportunity to boost construction-sector productivity—the value that could be created by the industry if productivity matched that of the global economy

Poor productivity in construction today is the result of a multitude of factors. The industry is highly fragmented, with a large number of small firms with lower productivity than the major global players. Current contract structures are often confrontational, which leads to disputes and change orders. And regulations are complex.

Underinvestment in technology is another root cause of low productivity. There is robust evidence of the link between the level of digitization in a sector and its productivity growth. The U.S. construction industry has invested 1.5% of value-added on technology, compared with 3.3% in manufacturing, and an overall average in the economy of 3.6%. In the United States, construction is the second-least digitized sector after agriculture.

What explains this lack of commitment to investing in technology? One reason is that construction overall tends to be relatively low-margin industry, particularly for smaller players that simply don’t have the money to invest. Another is that many firms don’t recognize underinvestment as a key factor behind the sector’s poor productivity. In MGI’s Construction Productivity survey, respondents (mostly large companies in developed countries) listed underinvestment in innovation only seventh out of 10 root causes of low productivity in the sector.

However, our research finds that innovation can make an important contribution to turning this situation around. Gaining traction are digital technologies, new lightweight materials and advanced automation.

Of the three, digital technologies are spreading the most rapidly. Our survey revealed an adoption rate of more than 44% among respondents with more than 70% expecting to adopt them within the next three years. These technologies include user-friendly apps that enable real-time communication among crews, often loaded on hand-held and mobile devices, and 5-D building-information-modeling (BIM).

Use of such digital tools can address many of the core problems that beset the construction industry, including a lack of communication on complex sites, inefficient—and insufficient— design upfront leading to change orders and delays, and a lack of clarity on procurement and managing supply chains. However, the biggest leap in productivity can be achieved by use of more prefabrication and standardization with buildings largely manufactured in factories and assembled quickly on-site. A five-totenfold increase in productivity would be possible if construction were to move to a manufacturing-like system of mass production with a much greater degree of standardization and modularization and the bulk of construction work taking place in factories off site.

A five-to-tenfold increase in productivity would be possible if construction were to move to a manufacturing-like system of mass production with a much greater degree of standardization and modularization and the bulk of construction work taking place in factories off site.

In the U.S., such approaches are increasing but are not yet the norm. In an August 2016 survey by the Associated General Contractors of America, only 13% of respondents said that they were investing in off-site prefabrication. There is a large opportunity for parts of the U.S. industry to reap huge productivity gains by moving more decisively in this direction.

Some of the most exciting developments are in developing economies. Take, for instance, new capabilities to print submodules or even complete concrete structures. In early 2015, Shanghai-based WinSun Construction, a pioneer of 3-D-printed structures, unveiled a six-story apartment building built entirely with a 3-D printer. In Dubai, a 2,700-square-foot office building was printed in 17 days at a cost of about $140,000. In October 2016, U.S. construction company Sunconomy announced plans to build the first 3-D-printed houses in the country.

One of the major hurdles to successfully making a transition to greater use of modularization and prefabrication is that, unlike manufacturing, construction is characterized by bespoke designs and unpredictable demand. Predictability of demand is vital if companies are going to invest in productivity—enhancing capacity and innovations because prefabricated elements tend to be more capital-intensive. MGI has found that an automated facility producing sufficient cement slabs and walls for 12,500 housing units could cost about $40 million. Only an assured level of demand can justify such an investment.

Innovation is everywhere—and is rapid because of digitization. The construction industry has a real opportunity to harness its power to save time and cost, reduce complexity, raise productivity, and create value. In conjunction with action on a broad front including reform of regulations and contracts, improvements in procurement and supply-chain management, and boosting skills, innovation has the power to unlock higher productivity in construction by moving toward this more manufacturing-style production system.

Steffen Fuchs is a partner in McKinsey & Company’s Dallas office.