The education market accounts for 25 to 30% of all revenues generated annually by the modular industry in the United States. But if you are like many people, when you hear the words “modular” and “education” you think of relocatable classrooms – also known as classroom trailers.

While it’s true the modular industry builds, sells, and leases thousands of relocatable classrooms annually, the industry also delivers many modular projects and even entire campuses. Here’s a few projects that may change your perception.

As a collaboration with Blazer Industries and Portland State University, the SAGE classroom combines the latest thinking in healthy learning environments and is designed with affordability and sustainability in mind. The 42x64 feet classroom building features three main classrooms and a conference room. Each classroom has a set of clerestory windows strategically placed to allow up to 4 times as much natural light. An interior work area was built with ceiling-height windows, to provide continued natural light. The designer’s choice of interior and exterior paint provided a seamless blend with the existing college landscape and structures while being environmentally safer than the average classroom.

The designers incorporated a powerful, yet energy-efficient Energy Recovery Ventilator. The ventilator system pumps 600 cubic feet per minute of fresh air into each classroom. This provides an oxygen-rich atmosphere designed to promote a better overall learning environment for students. The system uses mini-splits which are central to the heating and cooling of the building. Paired with fans throughout the building, fresh air is constantly circulating. Walls made of BIOPCM (Phase Change Material), contribute to the classroom’s high energy efficient ratings. The honeycomb membrane of the material stores hot and cool air to release as needed. When the temperature in the building fluctuates the air is released to create the optimal temperature. Air conditioners are among the highest energy users, and the building components all work together to reduce the draw of electricity.

While Olympic College secured all the necessary construction permits, the manufacturing process began. Blazer Industries assembled all the green building components from walls to windows, while Pacific Mobile Structures ensured all the site work development including pouring the foundation and completing landscaping was done to blend into the forest location. The building was positioned to take advantage of the sun's movement, saving on electricity costs. The improved HVAC systems provides healthier air. In all, the project was completed in just four months!

Originally designed to be a site-built conventional 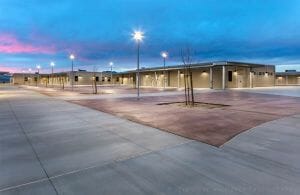 project, Murray Middle School in Ridgecrest California, came in astronomically over budget resulting in a reassessment and redesign. Meehleis Modular stepped forward to undertake this immense challenge and after a short period of time was able to significantly reduce costs and bring the budget back under control. By fabricating large portions of the project in their Lodi facility, the company nearly eliminated material waste and increased quality control directly resulting in cost savings.

A joint project between Sierra Sands School District, the Department of Defense and the Navy, Murray Middle School is a complete campus that includes standard classrooms as well as science classrooms, a media center, gymnasium, cafeteria plus kitchen, and administration facilities. Because the site is so close the Naval Weapons Station China Lake, the campus also needed to meet Anti-Terrorism Force Protection (ATFP) standards.

The campus layout was designed with protection in mind the campus layout while doubling as environmental protection. It provides a defensible space and the simple exterior features reduce damage from potential threats. The site was planned to provide protection for students and protection from which the harsh climate Ridgecrest and neighboring Death Valley are known. The horseshoe layout of the campus shields the students from the winds, which can be high during certain parts of the year and ample shade structures were employed to combat the heat which can reach above 115 degrees Fahrenheit.

A groundbreaking achievement, the campus at Murray Middle pushes what modular construction to the limits. Meehleis Modular partnered with Protective Technologies and EXL Structural Engineers to design a structure that meets Division of State Architects (DSA) requirements and the Department of Defense's ATFP (UFC 4-010-01) blast requirements. The result is one of the first blast resistant modular campuses in California. Roof overhangs were omitted to reduce blast forces on the buildings and specialty doors and windows were implemented to provide the upmost security.